The second map White shows us is Warfare. The map seems to indicate only four fighting styles, although there's probably several different ways to kill someone in this era, these four styles maybe be the largest on a mass scale, and most peculiar to their "zones". 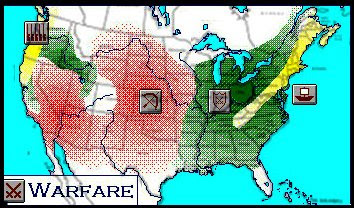 At first glance, one is tempted to just correspond armies with government types. For the most part it can looks that way, but it's but there are cases where certain soldiers serve outside their usual polity match-ups.

The Horse Archers are the only units the site goes into detail on. They start to appear in the more Western parts of the continent, and their range is by far the largest, as they're natural combatants of both the grasslands and the deserts. However, the population density for the nomadic communities is low, but still, since horse archers make up a quarter of the population, that's still two million or so on the plains. No wonder they're so feared, and it's hard to settle a community past the Mississippi. One thing that I've been wondering about is how it seems to be the primary form of warfare throughout the desert kingdoms of Free Zone California and New Mexico, and it's likely they're more akin to the light cavalry found in ancient Persia than the more steppe-barbarian Cowboys.

In yellow, we see an icon with a line of men holding polearms. The page is labeled "Pikemen". Pikes and spears were very popular in republics and early democracies like Rome, Medieval Italy and Greece. This form of weaponry could be especially useful with a large, relatively untrained force, and is one of the best counter measures against cavalry. They seem most prominent in the Republican city states, which makes sense for urban populations with a premium on space and a large middle class populace. It's hard to tell how many are found on the continent,  as it's quite possible pikemen are found wherever there's a large urban population that can support a standing army. It's also of note that it's not just the city states, but New Jersey (a feudal kingdom) and the Appalachian mountains. Pikes in rugged, mountainous areas are not unheard of-- take the Flemings of Medieval Scotland. As for Jersey, it might just be a case of "when in Rome".

The green patch with the shield signifies "lancers', the heavy cavalry fighters. In short, knights. White even has an image on what they would look like. The apex of the feudal warrior class, they're associated with feudal states, although there are quite a few in the desert as well. Historically, a knight has to be rather wealthy to afford the horse and equipment, but in the Hydraulic Empires, the rulers are able to allocate their considerable resources to knights who report directly to them. Interestingly, the knights of Deseret are also celibate, so that would make them very comparable to the Knights Templar, or possibly paladins of role playing games. I wouldn't be surprised to see that specific branch called something like Templars (Mormon worship is conducted in temples) or Crusaders. (The lancers seen in California are also supposed to be celibate, but I have a theory the fluctuating politics and richer forests of that region makes more "in theory". The dynastic turnovers White mentions are probably more common there.) However, there's also lancers in the area that occupies the New United States, particularly the area that occupies to Chesapeake Bay. For now, I'm drawing a blank on why it's there. For the first few centuries, many automobiles were scavenged and melted down to make weapons with. This has often made things like Mercury, sables and thunderbirds part of the heraldry.

There are many white spots on the map. Perhaps no war is waged at all, but I have to say I do have doubts about that. There is likely still a population that clings to the upper north, and the harsh winters have made them mean. Also, the Great Lakes region provides a quick and easy transport from the areas that probably cannot provide a lot, to those...that can. Thus, I would bet Minnesota and Northwest Ontario are home to Raiders, who routinely plunder the kingdoms to the south, and return home. Those of a kinder disposition might be tempted to trade metals and furs, but for the most part we see a powerful group of Raiders, with clubs and axes that do quick sacks and runs. The Lakes are somewhat easier to navigate, but also provide less buoyancy, so the raids are designed for frequency.

Florida also seems to have little military,even though Secretarial States were formed out of practical military matters, so there would have to be some kind of warrior class. My belief is, like the Horse Archers their combat come heavily from their way of life, and like Pikemen, their weapons are lightweight and no heavy on resources. Therefore, I think many of what they use is also good for the jungle. Bolo whips, poison-tipped darts and scimitars for cutting through heavy brush. Also, it's pretty certain that just like centuries ago, these islands became dens of piracy. I also have a theory that the reduced population might have to do with many zoo and circus animals making themselves at home. If the residents played their cards right, they might be able to have something akin to war elephants seen in India...at the very least I can see that tactic forming in Latin America.

Finally, while open warfare is not conducted in these regions, I think there is an occasional bout of espionage. this is especially true in the Cascades. These regions are probably occupied by rangers or certain kinds of spies.
Posted by Rob Bartlett at 11:07 PM