The last of the three color coded maps is religion. This is by far the most diverse of the maps, with eight different kinds of regions, and three icons for likely various miscellaneous categories. To be honest, this is probably where White lets his imagination run away him the most. On some level, it's hard to imagine Scientology and Buddhism overpowering the regions, which do have primarily Christian populaces. Perhaps the history of how these religions came to power would have explained that, and have been pretty fascinating. When you think about, religion can take some amazing turns in just a century or two. 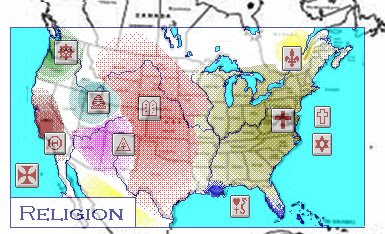 The majority of these religions are Christian-influenced. What I noticed, looking through the image archives, is that White had more of the borders that dot the pages. Not a hard and fast connection, but it seems to me that many of the borders correlate with a religion, and different pages that fall under that denomination, which might explain why some of them were done late, as White may have been deciding which border to associate which pages with.

Most of the country worships via the Non-Denominational Church. At least half, taking a guess. It's, rather ironically, that last vestige the United States that exists throughout the country. The last flicker of federalism. Any relation to the Roman Empire is probably very much intentional. It has a much greater presence in the North, and there might be a lot of grinning and bearing in the South.

Covering a large tract of land are the New Israelites. The popular religion among the cowboy tribes, the name may let people forget that it's still a very Christian religion. It's in fact, and old school one, that may have been quite popular with fundamentalists and evangelicals.

Along the Gulf coast, we see Voodoo taking hold. The real Voodoo is historically a mix between Catholicism and many African religions. Practiced mainly on the island, the Haitan immigrants to New Orleans and Southern Florida is not quite as prominent, but a few hundred years could fan that flame. It should also be said there's no guarantee the zones for each religion are homogeneous, and Voodoo may even be just be a sizable but peculiar minority. A lot of women have been prominent in the history of Voodoo, and it is practiced in the Secretarial States. Throughout the world, there's been a bit of a fear over the religious leaders supplanting the secular ones. This could easily be amended in countries where the Queen serves as the High Priestess. To make sure that ambition and politics don't play too large a role in it (Say, a nubile young dancer coming onto the King), potential Priest Queens are selected at birth, and groomed for her dual title. Or perhaps Voodoo queens are to be celibate just like the Justices.

Further West we have Mormonism, the last of the religions theoretically tied to Christianity. The members of the Church of Latter Day Saints finally has what they wanted--isolation from the outside world, and a nation to do as they see fit. Missions have been long part of the Church's history, but it's probably not see easy in this era. Chances are spreading the message and seeking to convert has become more dangerous-and in turn much more violent. As the armies are usually at the fringes of the world, the job of being Missionaries usually falls to them.

It's hard to denote what exactly "New Age" is. It's not any organized religion by any stretch of the imagination, and you probably couldn't get two people in the same commune to agree. It certainly seems like an odd pairing with the rigid structure of a Hydraulic Empire. If I had to guess, it involves a mixture of Navajo, Hopi and Egyptian beliefs, with a strong emphasis on the environment, and morphed into centuries of rituals and dogma. Note that the former state of Colorado is a triangle of Mormonism, New Israelite and New Age.

Taking over California is Scientology, the controversial cult that I won't get into too much in fear of having this blog sued, but it's curious this managed to explode so much. In some ways it feels like a parody of California culture by having a Hollywood cult control the entire state. There is one thing to keep in mind though, is that the small empire that dominates the south is called "The Free Zone", which is the branch of Scientology that has rejected the "pay as you go elements". Whether that sect has taken over or been co-opted by the religion is anyone's guess. It seems almost strange that a faith with so many sci-fi trappings could fit in the modern world. But hey, lasers become magic, aliens become demons. However, the star-based backdrop probably makes astronomy very, very important to the faith. Just like the Egyptian Kings are the descendants of Gods, so do the rulers of California descend from the stars, and return there upon their death. I also wonder if the rich tapestry of the motion picture world itself has become part of the backdrop, with Marilyn Monroe, John Wayne, Darth Vader and many others become Gods, Heroes and Monsters of Scientology mythology.

The Buddhists have taken over the Northwest. Now, Washington and Oregon do have a sizable Asian minority, (and influence), and they're among the least churchgoing regions in the country, but I do wonder if this is enough to fan the flames into a movement. And they almost seem a little too belligerent to take the teachings of Buddha to heart. So I wonder if this is something that has transformed more than even Christianity under the Non-Denominational church. Also, as I mentioned above, I pointed out New Age beliefs have as much a foothold in that region as they do in the southwest, so I theorize American Buddhism maybe be warped have a lot in common with New Age--particularly the sacrosanct nature of the environment. High priests revere and consecrate the trees and brooks. To rupture nature is to disrupt the balance. While the a lot of the nation may not be fanatic about it, out here pollution and waste may be as big an offense as eating pork on the plains. If not much moreso. Therefore, Buddhisms consider it their duty to preserve nature, no matter what. People are a different matter entirely...

And finally, we have Catholicism. White mentions much of Europe has returned to it, and the Vatican may serve the same role it did in the Dark Ages, and the Non-Denominational Church does in America. There' probably not much to write here. While I've said that a lot about a faith can change in a thousand years, I think when the religion is already 1500 years old, there's probably not much more to tinker around with. Originally a minority in the United States, they eventually grew to become the largest denomination. During the rise of the Non-Denominational Church, it's very likely a few were driven off to Quebec or Mexico, or underground, but there may be Catholic ghettos, similar to the Jews.

Judaism apparently has its own page, and even its own design border. Jews' survival instincts would allow them to weather the downfall of humanity, and the map of Richmond indicates Jewish neighborhoods area staple of cities, at least on the Atlantic Seaboard, especially the Mid-Atlantic, with its relatively Jewish population. There's also a likely sizable pockets in St Louis, which was recently rebuilt by merchants, Florida, as it's sort of a mixed religious area anyways, and a tribe in the Mojave Desert.
Posted by Rob Bartlett at 7:31 PM