Of the many maps Matthew White drew up, three share a certain similarity; They divide up the country into different colorized zones. There's one for government, one for warfare, and one for religion. The first we'll be looking at is government. What I've done is take these maps, and placed them over North American borders. It's not perfect, but it gives you a very good idea on what goes where. 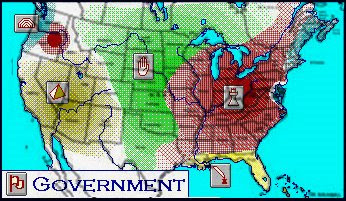 The different zones, if you look closely, have a circular radius that moves ever outward. I don't know if that indicates the centers are more populous, or are some kind of core, but it is noteworthy that Ohio is a principle kingdom.
White's already explained two forms of government to us. The first is the Secretarial State. (As seen in yellow, with a quill for a symbol) Covering Caribean islands, Florida and coastal Louisiana, it's one that White himself made up, from what I've researched, but to sum it up, it's a government where women take care of civic duties on behalf of their hard-traveling husbands. It's uncertain if this resembles the mercantile or feudal governments otherwise, but it's probably a bit of a mix. The poor drainage and coastal locations suggest trading is a big part of these areas, but may be monarchistic than oligarchical.
The other system of government White talks about is Hydraulic Empires. Colored gold, we have California, Deseret (Salt Lake City and surroundings), and New Mexico. Situated in the desert, they are absolute monarchies with an efficient and omnipresent government. White makes comparisons to ancient Egypt, though America's arid lands more resemble Persia.
The next three forms of government are not described, but we have much more decent reference points. In the red circles are the Feudal zones. It's the type of government we most associate with medieval times, and it would appear most of the people on the continent live like this. Feudalism, in theory, is where warriors divide up land up amongst lower and lower tiers until you have farmers that work the land. Warfare and agriculture essentially make up this system, so it tends to take place in areas with the best farmland or mineral wealth. Listing every feudal nation would take a while, so let's just say it consists of most of Dixie, the rust belt, Quebec, and strangely enough a patch of inland west of the Rockies. From what I've gathered, most don't call themselves "King", but use titles are in-name-only relics of a democratic past.

Next are the republics. Colored blue, they're pretty much New England (give or take Vermont), the Capital Beltway, and the more populated areas of the Pacific Northwest. They largely take a cue from Medieval Italy, which were independent city states (and occasional empires), which thrived largely on sea access. Of note is these areas had very dense populations in modern times, and the very "blue state" gravitation towards infrastructure may be reflected here, as well as the locations of prestigious universities.
The area shown in green with the hand as a symbol has primarily tribal societies. It encompasses Mexico to Canada, with its core being the Great Plains. The most talked about tribes are the cowboy ones, with a few reference to desert shepherds, like we see in the Middle East the "tribal" swath is quite large. This map shows that further north, way into Canada, we see references to "Hunters". These might resemble many native cultures that inhabited the continent long ago, with subsidence hunters and fishers. A more European case would the Sami of upper Scandinavia. Because they largely don't live in the united states, there doesn't seem to be a page for them, but I still think that would be an interesting look. Do they use sled-dogs to get around? Are they the source for furs, fish and metals we see in the upper north?

I have wondered a bit about what governments may look like in the rest of North America. Down south in the deserts, there's a small smattering of herdsmen. They might simply be nomads who for now have migrated outside the Hydraulic Empire, but Mexico's Catholic population leads me to wonder if there are monastic communes in small villages where the Church is more than just the center of civilization, it is civilization. They're desert theocracies, but they're not hydraulic empires since each order answers to the other, and they're not about building up great nations, simply scraping out a living in the service of God.
I have another idea which is kind of goofing around. This wouldn't be on the North American continent, but maybe Cuba or South America. If the warmer climates allow women some measure of equality, I wonder if even further south we may areas where they can even claim supremacy. Something like the Amazons of classical myth. After all, not all women are going to take the reversion to traditional gender roles laying down. The warmer climates rely on less strenuous agriculture. Also, the New Amazons would probably be a naval power, which requires strategy and finesse--something women are certainly capable of holding their own in battle. The gender roles may be reversed, or they may simply be an all-men society in which women may travel for breeding, but male children are wiped out. (Infanticide may not be a great thought, but it wouldn't be the first culture to do it) It's all pretty fantastic, although the Amazon river itself was based on reports by travellers who swore they saw women warriors.
Posted by Rob Bartlett at 10:25 PM