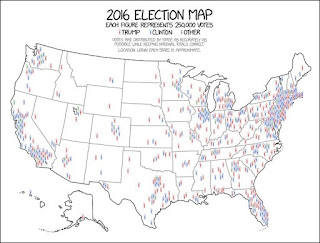 This tiny little picture showed up when talking about "red" voting blocks vs "blue", and how the red covers a great swath of geographical area, despite having a smaller population. It's interesting to compare it to White's population map For the most part, both largely correspond in terms of where people live, (New York is almost eerie) it's just that the the major Urban centers, particularly those of the Mid-Atlantic, the Southwest, and Chicagoland. The Northeast has an urban sprawl impossible to maintain outside industrialization, and California owes its smaller population to scarcity of roads and water. Given that Ohio and Indiana are  reasonably populated, it seems possible White conjured up the Bailey invasion for the explicit purpose of keeping the Midwest in check.

Florida of course, has seen a huge population plunge. This might be the result of thin soil and hurricanes, or perhaps White had another barbarian invasion.

Anyways, these areas that are the most rural and isolated (as long as they're attached to arable farmland) would be the least changed by the medieval regression, and their values would most likely Medieval American values. pockets of relative progressiveness would most thrive the best in less urbanized areas that still lean left like Maine, Vermont and Minnesota.
Posted by Rob Bartlett at 8:55 PM