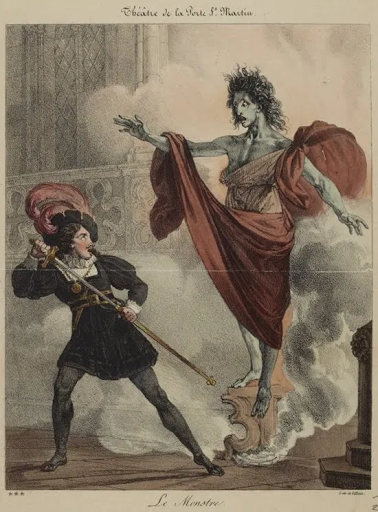 Frankenstein's Monster is considered at least number two in the holy trinity or Mt Rushmore of classic monsters. Along with Dracula, he has feet in both Victorian literature and more modern Hollywood, and is on the shortlist of anything evoking an old school, creepy feel. However, he occupies a strange middle ground in monster lore. Vampires, witches, and werewolves spring from late medieval beliefs, and are relatively easy to fold into medieval settings. By contrast, Mary Shelley's novel credited as the first entry in science fiction, and laboratories and electricity are considered as much a part of the lore as its gothic trappings. This may be why the subject matter has had a more difficult time transitioning than even older monsters, it's not quite ancient enough nor truly "futuristic enough". As well as the idea of stitched together corpses being someone aesthetically unpleasing to people.

But it's actually interesting if one goes back to the original text. Stiches and laboratory flasks and a lever collecting electricity are mentioned nowhere. In fact, it's implied Victor Frankenstein has looked back and reverse engineered the practice of alchemy, which would be more familiar to the, or a medieval world. Long before Boris Karloff''s lumbering, flat-headed, bolt-necked take crystalized the image forever, one can see early book art and even advertisements for stage productions, which paint a different picture than what we're used to. While there are variances on whether the creation is supposed to be good-looking, there's a generally common thread of it being long-haired and donning the apparel of classical antiquity, emphasizing the oft-dropped subtitle of "the modern Prometheus", and evoking the sense that Frankenstein is mucking around in more arcane and archaic knowledge than pushing the limits of "mad science".

In fact, what's also of note is that these illustrations dress Baron Frankenstein (He would not be a "Doctor", the textual version is basically a college dropout.) in clothes more likely found in the renaissance than the Regency era of the novel's setting. If this was in fact Frankenstein's costuming, there's a strong resemblance to dramatic depictions of Doctor Faustus. This would make sense, as Doctor Faustus was probably one of the earliest icons of "Forbidden knowledge", and costumers would be most inspired by him. The classical "alchemist" Frankenstein might be more appealing to audiences who see forbidden knowledge as something forgotten and buried, as opposed to on the precipe.

It's unknown what Frankenstein or his monster would look like to the denizens of 2900, as there's probably a considerable drift from any standardized look. It would be interesting if it came full circle to the toga-clad perversion of Adonis.
Posted by Rob Bartlett at 5:49 PM