A good way to look at the change in the difference between Industrial and Medieval America is something I like to call the Sinkhole Effect, or the anti-sprawl. As cities become smaller, they support less and less suburbs, and so America, in many places, will resemble its most rural aspects. In colonial times, Maryland largely resembled Virginia and much of the tidewater coast of the country. With the building of Washington, and the chain of major cities like New York and Philadelphia expanding, Maryland eventually became culturally part of the Northeast--and at least in electoral terms, Virginia and North Carolina may eventually follow suit. But megalopoli no longer being a thing, that would recede, and Dixie culture would absorb Yankee culture. (Maryland is still a little bit culturally Northeast, however. This is become the South is not particularly Maritime, and because it's the epicenter of the Non-Denominational Church, it has a lot in common with a region where Church hubs aren't usually more than 75 miles apart or so.

If you'll look at the trade map, you'll see what is now Ohio (a combination of Ohio, Indiana, and Kentucky) has become a breadbasket. Ontario, Illinois/Iowa and Michigan also appear to produce enough grain to trade off surplus grain. In short, this is the Grain Belt of Medieval America. 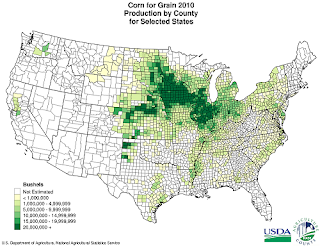 This map is the Corn/Grain Belt of the United States as it is today. The highest concentration is mostly west of the Mississippi, but it's harder to grow crops out there between the lack of machines and the Herdsmen always coming down on peasants. Therefore the grain belt is moved southeast. (Replacing the rust belt, or least cutting it in half) Grain production is no longer industrialized (And needs to feed considerably less people), so the less, but still decently fertile area around the great lakes is where all the farming is done. This is the sinkhole effect. 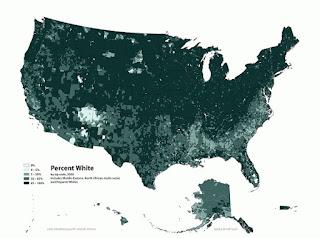 Another case is the non-white population. Even the biggest city in Medieval America  isn't going to to be as cosmopolitan as a mid-sized city in Modern America. Immigration to large population centers is going to more likely come relatively locally, than across the sea. Can you imagine a wealthy merchant in Philadelphia saying the Adirondack Mountains aren't sending their best, their brightest, but their murderers and rapists? Asa  result the gene pool is much more homogeneous, though people of color are still plentiful in the South, (Which has a large black in most of its counties, and is adjacent to the Caribbean) Southwest (Which had a much older, non-white population who were there before it became a part of the United States, and the Mid-Atlantic (Where the urban sprawl was so vast, that population was still pretty diverse, even when near-decimated)