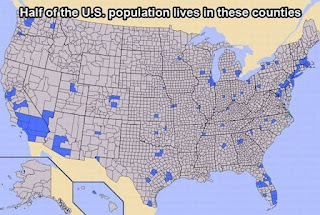 A map I saw that shows how largely urbanized this country is in the industrial age, (Although to be fair, a quarter of Medieval America lives in a a space not much bigger than all the blue area combined) It really needs to be stressed how much de-urbanization can cut off a nation's population. In medieval times, one in ten people lived in cities. In modern America, it's more like four out of five.

If you look at White's two population maps, the biggest differences are Ohio/Indiana and Florida. Florida, not having the infrastructure of the industrial era, has dissipated greatly, while the Ohio Valley is much, more populated. Curiously enough, Cuyahogo and Summit County aren't part of the super dense region of Ohio, and Franklin may just barely be in there. Wisconsin has also seen more of its population concentrated on the lake coasts--the area around Madison isn't as populated as today. Though it makes sense a lot of the Midwestern capital districts aren't as dense--government is less of a presence (and source of jobs) in the medieval world, and so the former capitals aren't really bustling metropolises unless they're on strategic harbors or rivers like Boston or Montgomery.

The so-called Bos-Wash region if a good example of this at work. In the modern era it made up about a tenth of the U.S.'s population. But now, it makes up much less. It's not that the area is particularly unlivable--in fact the Delaware river is actually pretty fertile in some places. Likewise, it's an important center of trade. But there's only so much square mileage to go around.
Posted by Rob Bartlett at 8:48 PM