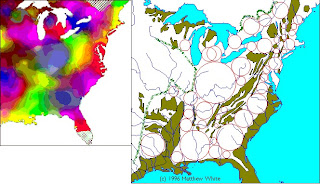 It should also be said that the rhotic vs. non-rhotic accents of America have sort of split the American languages in an interesting way. "R"'s are less likely to be used in words found in the coastal areas, and more commonly seen in the mountain and inland tongues.
Posted by Rob Bartlett at 5:41 PM